Homegrown Tamales with Venison and Tallow

Since we started growing corn, I’ve wanted to make tamales. In my family, we eat tamales for dinner on Christmas, a tradition in Mexico that has since spread throughout the Southern United States. I always associated them with holidays and big events and having never made them myself, assumed they were an intimidating and laborious process. But this year, our usual tamale source fell through and Jordan and I decided it was time to throw our hats in the ring. Now with several rounds of tamale-making under our belt, we can safely say that they are a really fun recipe! And actually not difficult at all, though they are one of those dishes (like pierogis) where if you’re going to make some, you might as well make a big batch and freeze some for later or to give away.

And since we rendered out lots of tallow from the deer Jordan hunted this year, we’ve been on a quest to use it in as many things as possible (like french fries!), just waiting for all the insults people have hurled at deer tallow to prove true. And yet once again we are pleasantly surprised to find that the tallow worked beautifully in these tamales. We did use some butter, partly for flavor and partly to add a softer fat to the mix. You could certainly substitute with the traditional lard or go with vegetable shortening if you prefer.

If you don’t have a steamer pot, any large pot will work used in conjunction with a steaming rack (basically anything that elevates the tamales above the bottom of the pot by several inches and has plenty of holes for the steam to pass through). We saved all of the biggest corn husks from our corn harvest this year to use as the wrappers but you can also find them online or at Mexican groceries. Some countries use other materials like banana leaves to wrap their tamales as well. For a visual aid in how to fill and fold your tamales, see the video below the recipe. 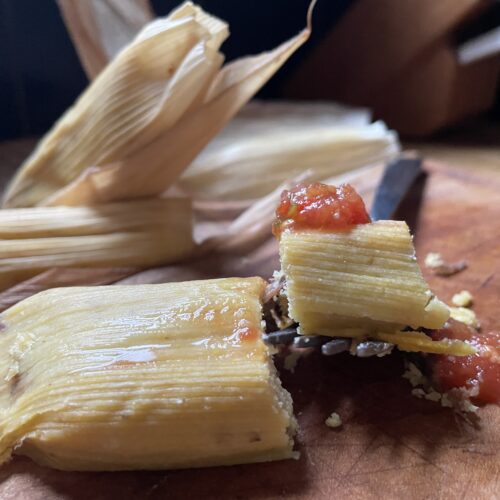 Tamales with Venison and Tallow

Don't be intimidated by tamales! Though there are a few steps, it is an easy process resulting in one of the best comfort food dishes ever invented. You can easily customize the filling with all kinds of ingredients, from spicy shredded meat to peppers and onions to simple beans and cheese. Once steamed, these freeze really well and are the perfect meal to give away or save for a rainy day when you need something easy, filling and delicious.
Print Recipe Pin Recipe
Prep Time 30 mins
Cook Time 1 hr
Cuisine Mexican
Servings 24 tamales

Share this ArticleLike this article? Email it to a friend!
Email sent!